This post contains affiliate links. As an Amazon Associate, We may earn commissions from qualifying purchases made from our chosen links.

As the name suggests, a benchtop planer is portable and can be fitted anywhere without requiring many footprints. Its usability also varies across the spectrum with suitability level for both professionals as well as DIYers.

There are many companies producing various types of benchtop planers. This article is a review of five of the most popular benchtop planers – Dewalt vs. Makita vs. Porter Cable vs. WEN vs. Grizzly. 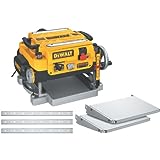 This is arguably one of the best benchtop planers out there in the market. Built almost to perfection, the performance and design of this planer remain unmatched.

With a powerful motor generating a speed of 20,000 RPM (10,000 RPM cutterhead speed), this planer can plane any wood whether hard or soft. The cutter head has three formidable knives and the package comes with an additional set of knives for easy replacement.

The gearbox system has two speeds – one for dimension cuts (reducing thickness) at 96 CPI, and the other for finishing cuts (smoothening surface) at 179 CPI. This dual feature is one of the most advantageous components of Dewalt DW735X.

Another significant feature of this planer is that the height adjustment remains constant without a lockdown. Also, with the turret depth stop, the level of required thickness is automatically controlled in case of mismanagement. 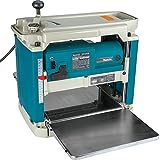 With a humble motor speed of 8500 rpm, this planer comes with an ‘Interna-Lok’ automated head clamp to negate as many snipes as possible. The planer has a small footprint and is lightweight which makes it easily portable.

The cutter head has dual double-sided blades with a cutting width of 12 inches and an adjustable depth cut of 1/8 inches. This allows the planer to deliver precise cuts and smooth surface that will require no or very few sanding. The package also comes with an extra set of blades.

Despite being lightweight, the planer has a design with four posts and diagonal cross supports which ensures maximum stability during operation.

The machine is solidly built, but make sure not to go beyond the capacities of what the planer is built to handle. 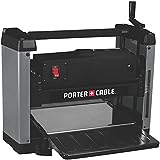 This planer is cost-efficient and performs effectively. It operates with a 15 amp motor producing 8000 rpm at 16,000 cuts per minute, which is decent enough for the price of this planer. However, with these figures, the smoothness won’t be glass-like.

The cutter head is fitted with two double-edged knives which are also reversible. And features the cutter elevation technology for reducing snipes. The cutting width is 12 inches and below. There is also a cranking system for adjusting the height of the blades.

This planer is also lightweight and can be carried around easily. The operation sound is also lesser than the high-end planers making it noise friendly.

For handling wider boards, the planer also has outfeed and infeed rollers. This planer makes a good machine for dimension cuts and leaves a smoother cut than what is normally expected from a look at the technical features.

The WEN 6552 planer can essentially be considered as an upgraded version of the WEN 6550. With a phenomenal rate of 25,500 cuts per minute, the cuts are extremely precise and the surface is glass-smooth. This planer can accommodate boards up to 13 inches wide and 6 inches thick.

The planer has three double-sided blades which makes it one of the best priced yet quality planer with three blades. Another feature is the material removal gauge system that alerts users at each pass regarding the cutting depth. This system helps in delivering a perfect finish.

For the more organized collection of dust, this planer has a fan-assisted dust port which blows the shavings and sawdust into a designated place for easier cleanup. 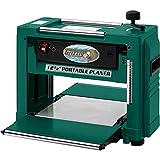 The planer comes with a 10,000 rpm cutter head and two dual-sided blades for a clean, accurate, and smooth finish. The blades are long-lasting and durable which do not require constant replacement. Its maximum cut height is 6 inches and width is 12.6 inches.

As far as the planning is concerned, this planer works with any variety of hardwood. Built with solid metal throughout, the operation is free from vibration. With a little support on the wood, snipes are reduced to a bare minimum with this planer.

This planer has a thermal overload protection system that prevents your machine from overheating due to prolonged use. Overheated machine invariably results in damage.

The Grizzly G0505 boasts of an accurate height adjustment that guarantees the perfect cut size of wood that you would want.

Choosing a benchtop planer need not be that difficult once the needs of a woodworker are considered. Whatever the circumstance may be, quality shouldn’t be compromised as this will backfire and burn more of your wallet.

In this review of benchtop planers between Dewalt vs. Makita vs. Porter Cable vs. WEN vs. Grizzly, based on technical features, performance, and users review, the Dewalt 735X seems to be best and most raved about planer. This planer is ideal for professionals who can work from home.

As far as Makita 2012NB, WEN 6552, and Grizzly G0505 are concerned, they are most suitable for DIYers, hobbyists, and upcoming professionals. Lastly, Porter Cable PC305TP is best suited for strictly DIYers and hobbyists.