This post contains affiliate links. As an Amazon Associate, We may earn commissions from qualifying purchases made from our chosen links.

No workshop is ever complete without an efficient benchtop drill press, which is useful for all woodwork whether you are a hobbyist or a professional. A benchtop drill press can not only cater effectively to your drilling requirements, but it can also be purchased at a significantly lower price as compared to a floor-standing model. What makes it even more attractive is how it provides the same working capacity as the full-size model but occupies significantly less space.

However, when acquiring a benchtop drill press, you must consider which model shall best address your needs. Let us analyze five benchtop models, namely SKIL vs. WEN vs. HICO vs. Euro Tool vs. General International, and judge which model will offer you the greatest utility.

The WEN 4214 is one of the more high-end models mentioned on this list and arguably one of the most powerful. Simply put, it can drill into wood, plastic, and metal with relative ease. What is even more impressive is that it is able to drill into heavy-duty cast iron with depths of up to half an inch.

The flexible speed gauge allows the user to drill at the required speed as the drill has a range of 530 to 3100 RPM and the digital screen allows the user to constantly keep the RPM in check. The drill press has been built to last as it has been constructed out of cast iron, which means it is somewhat on the heavier side. Ball bearings are an essential component of its induction motor in order to ensure durability, which allows the drill to perform admirably even at higher RPMs.

The drill in question should be given marks for adaptability as it has an onboard chuck key storage along with a 1/2-inch chuck and a JT33 spindle taper. The worktable can also swivel clockwise and anti-clockwise to a certain degree. The icing on top of the cake is the laser focuser, which is shaped like an X to ensure the drill performs with optimum precision.

The SKIL 3320-01 is flexible as it allows for the screwing and unscrewing of the jaws that then protrude from the drill. This multipurpose drill is equipped with a set of five different speeds. As a result, the speed can vary from 570 RPM up to 3,050 RPM, depending on the requirement of the user. An alterable depth cog allows the user to carry out repetitive drilling without losing out on accuracy.

Similar to the WEN model, this drill press’s worktable can be swiveled from left to right, depending on the user’s requirement up to a maximum of forty-five degrees. It also has a laser light beam, which allows for precise alignment and accurate drilling.

This drill is primarily for beginners who intend to acquaint themselves with workshop tools. This by no means signifies that the drill is a poor choice. On the contrary, it offers precise drilling capabilities along with a stable base. However, if one delves deeper into drilling, they will feel slightly curtailed by this drill and may want to buy alternate models for more professional work.

Similar to the model mentioned above, the HICO drill press has 5 options when it comes to speed. The RPM range falls between 760 and 3070. It too provides a work-based along with adjustors, which ensure that the material being drilled into stays in place, thereby ensuring accuracy. This table can also be swiveled up to a maximum of 45 degrees.

Therefore, the HICO model does not lose out in terms of adaptability and flexibility. However, its build quality suffers in terms of durability due to certain plastic components. The plastic components have been incorporated in order to make this drill usable in any weather condition, including the rain. This also means that the drill is lighter and safer than its competitors. Which is further exemplified by the safety switch provided in order to avoid any high-speed mishaps.

While the unit is supposed to easily drill through less arduous materials like wood, plastic, and cheap metals, it most certainly will struggle to drill through tougher materials like heavy-duty cast iron. Certain users have also complained that the attachment of the chuck is not a simple affair. 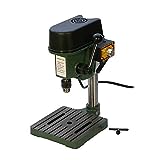 This drill weighs in at 12.2 pounds and measures at a miniscule 10? x 12? x 8?. It is safe to say that this is the lightest and smallest drill on this list, making it very handy for those hard-to-reach crevices. However, the size is not a good indicator of durability as the drill appears to be quite sturdy. It is made up of a combination of both metal and plastic.

The drill is equipped with an adjustable speed knob, which allows for speeds up to 8,500 RPM. The base, while somewhat diminutive, does not compromise on stability and can be fixed or mounted to the workbench. The package also includes the 1/4-inch chuck, a 5.5-inch cord, and a one-year warranty.

Unlike the other models whose spindles can be swiveled, this drill’s spindle is fixed, which allows for repetitive accurate drilling but does not give room for maneuverability.

The controls have been simplified to just a couple of knobs and settings, which makes this benchtop drill press an ideal fit for beginners. While it does not possess the power of certain other models present on this list, this drill can still hold its own. 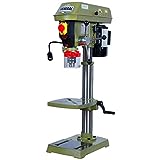 This drill comes fitted with an industrial-quality, 1/3 HP, 120 V motor. An adjustable speed dial gives the user the option to fine-tune the motor’s output according to the density of the material being drilled into. A spring-loaded hand lever has also been provided, making it easy for the user to tweak the speed which adds to the adaptability of the drill.

The drill has a minimum output of 500 RPM, which can go up to a maximum of 3000 RPM, and is capable of carrying out rudimentary tasks.

The product’s build is seemingly sturdy as its head, base and table have been constructed out of cast iron. This means that while the drill is quite heavy, it does not budge, allowing for it to perform steadily and not suffer from inaccuracy caused by vibrations. Durable bearings also add to the stability of the drill. This drill also sports a laser pointer, which allows for precise drilling.

An adjustable dual-depth cog has also been provided, which allows for control of downstroke and upstroke movement. In short, the General International 75-010 M1’s variable speed motor can be classed as a capable all-rounder which performs most tasks smoothly and with steadiness.

After gauging the apparent efficacy of the all the benchtop drill presses in question, namely SKIL vs. WEN vs. HICO vs. Euro Tool vs. General International, there is one clear winner. The WEN 12″ Variable Speed Drill Press performs admirably and reliably. With the power it offers, its build quality and embedded features adding to its adaptability, this drill is a clear winner, whether you are a professional or a hobbyist.